Although GIM has always been research-oriented, it has also continued to provide practical courses such as Nanguan and Guqin, as well as courses in Asian music and global music, hoping to expand students' music experience and international horizons. After the government launched the new southbound policy, with the strong support of our school, we started a series of Asian music and dance courses from the 106-1 semester. We hope that through the practice of music and dance, students will have a better understanding of Southeast Asian music culture. Therefore, GIM continues to invite masters to teach and participate in the final performance, which is popular with students and has achieved remarkable results.

The island of Bali boasts rich traditions of music and dance. The most representative musical form is gamelan. Gamelan consists of different kinds of percussive instruments made up of metal keys and gongs. Its status equals that of orchestra in Western classical music. Gamelan has many varieties and regional differences. Recently, courses in GIM center on the two kinds of gamelan that NTU owns, namely gamelan angklung and gamelan kebyar.
Courses introduce the students to the important features of Balinese gamelan in general. Then it will focus on hands-on performance practice, including respect for instruments, basic techniques, and ensemble playing.

In the 106th acdemic year, we invited Pf. LEE Ching-Huei in TNUA to teach, and invited the internationally renowned Balinese composer Pf. Nyoman Windha and his wife Warsiki I Gusti Agung Ayu, a Balinese dancer, to come for intensive training and performances. The training and performance was extremely successful, which also allowed GIM to gain support from NTU to purchase Taiwan’s first set of Gamelan Gong Kebyar and Gender Wayang. The two sets of gamelan were selected by Pf. Windha and were been held a blessing ceremony in Bali by Pf. Windha. Pf. Windha gave the two sets of gamelan the name NTU Gamelan Gita Lestari, which is of extraordinary significance.

In the 107th academic year, GIM invited the Pf. Made Hood in TNNUA to teach. His father, Pf. Mantle Hood, was an important promoter of Gamelan, and also a pioneer in American ethnomusicology. Therefore, Pf. Made Hood had learned a lot by osmosis since childhood. Pf. Made Hood has accumulated rich experience in playing and teaching gamelan.

Central Java music and dance are very delicate, making people calm and peaceful. Gamelan is easy to play and emphasizes the spirit of group cooperation,  which make it widely popular in the world.

This course is guided by teacher Anastasia Melati.  Anastasia Melati is a senior Indonesian court dancer in Yogyakarta. The main content of this course is the court dance and gamelan music in Central Java. The dance part focuses on practice, and the goal is to teach students to learn a complete dance “Sari Kusuma”. For the music part, since NTU does not have Central Java gamelan, we replace it with gamelan gong kebyar.

Pf. Hsin-chun LU, the associate researcher of Academia Sinica, is an important researcher of Burma/Myanmar music. In recent years, Pf. Hsin-chun LU has been invited by GIM  to teach Myanmar music culture and practice course. At the end of the course, national treasure artist Ma Hlaing Than Tun, the well-known Hsaing Waing musician Thiri Maung Maung, and the outstanding dancer and puppet master Nyan Lin Aung were invited to Taiwan for intensive training and performance.

Ma Hlaing Than Tun is a national treasure Burmese  music singer and drummer. He is also a famous composer. In 1975, he became the master musician of the Myanmar National Orchestra. Thiri Maung Maung founded his hsaing waing ensemble in the late 1980s. He has been active in various folk performances and national film and television media for a long time. In addition, countless music albums under his leadership are known for their superb musical capabilities. Nyan Lin Aung graduated from National University of Arts and Culture, Yangon, majoring in dance and puppetry. Nyan Lin Aung has represented Myanmar many times in cultural exchanges. The superb music and dancing skills of these three artists are well known in Myanmar.

Teacher Wang used to be a full-time musician of 南音樂團 in Fujian and the music director of 唐樂府南管古樂團. She founded 心心南管樂坊 in 2003, devoting herself to the contemporary inheritance and development of nanguan music. Therefore, inviting teacher Wang to teach courses is really a good news for our students.

This course is designed to introduce students to North Indian music, in particular, the art of tabla (North Indian drum). This hands-on course covers the techniques of playing tabla and also covers the principles of tala (measured rhythmic count) system, along with notation and various traditional compositions. Selected viewing and reading materials will be provided to students for deepening their understanding of Indian music.

The class is designed in two levels. One is for beginners and the next level would be advanced. Beginning students will be initiated to the various sounds of the drums and taught to elicit the proper sounds from the drums by learning important techniques. They will then be introduced to fixed compositions in different talas (rhythmic) cycles culminating into a performance level by the end of the course. Advanced students are taught compositions that require a higher level of skill. They will also be introduced to the very intricate measured counting system and calculations and taught compositions from the six schools of tabla. They will be able to showcase their skills during the final recital. 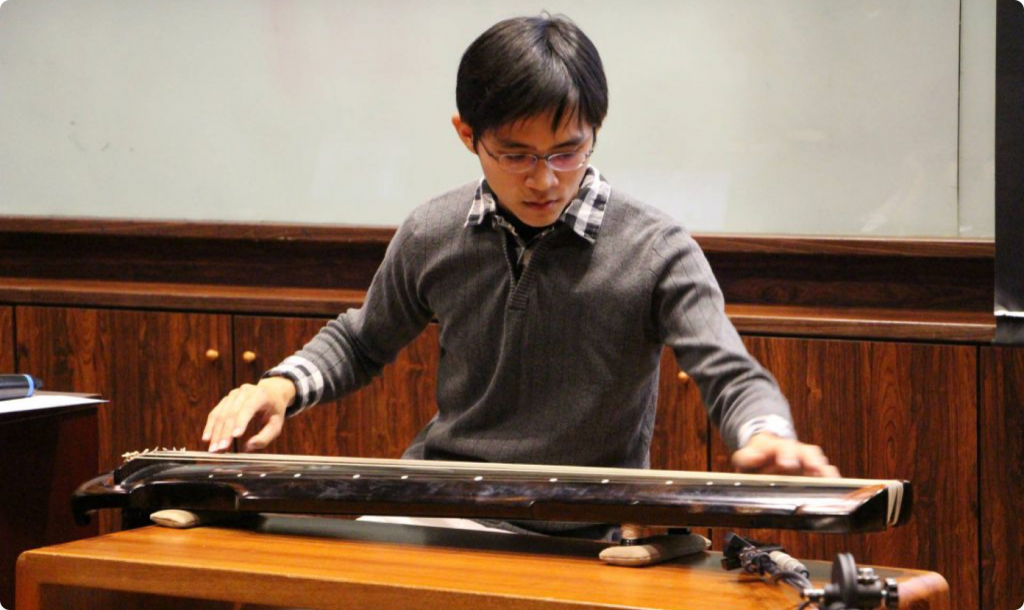